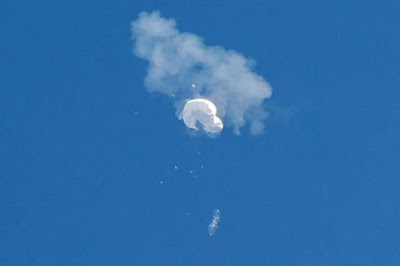 When the F-22 all-weather advanced tactical fighter jet was first introduced in the United States Air Force about 15 years ago, Washington saw these “Raptors” as its first line of defence. The F-22s were deployed in Asia and the Middle East, but they had nothing to shoot down and quickly acquired the reputation of being the aircraft that got left behind in every US military operation.

Yet none of the people who either designed, manufactured or flew the F-22 could have ever imagined that, when their plane did finally see real action, its first air-to-air “kill” wouldn’t be against a top-notch opponent fighter jet but, rather, a balloon, based on technology first pioneered over two centuries ago, just when the US came into existence.

The military-industrial complex President Eisenhower warned us about has nothing on the current threat.
When even the Jewish World Review is warning us about the threat from the left, we should take the threat very seriously.

Violent growth of government controls and welfare in a Party government leads California $25 billion budget deficit.  The wealthy of California have seen their incomes decline, so the state has less to tax. The California government's cure is to tax people even harder [US News].

California lawmakers are pushing legislation that would impose a new tax on the state’s wealthiest residents -- even if they’ve already moved to another part of the country. Assemblyman Alex Lee, a progressive Democrat, last week introduced a bill in the California State Legislature that would impose an extra annual 1.5% tax on those with a “worldwide net worth” above $1 billion, starting as early as January 2024 [Fox News].

The tax will apply to every resident, regardless of whether they are in the state part-time or temporarily. It will also allow the state to pursue wealth taxes from former residents who built their wealth in California but moved. For those who move out of state and do not plan on returning, the wealth tax will be slowly decreased over several years “based on the percentage of days in the year the taxpayer was present in the state, plus the years of residence over the three previous taxable years,” the bill states [Just the News].

"I have a dream that my four little children will one day live in a nation where they will not be judged by the color of their skin but by the content of their character. "

Political equity is money (or treasure) spent for political influence.  When the Democratic Party talks about promoting political equity, they are talking about government being used to buy influence.  Implicitly, government can be bought the same way.  The Party reasons that government should be able to control people or classes of people with money or goods that authoritarian government has under control.

This is diametrically opposed to the actual principles of democracy.

Kari Lake may be governor of Arizona

The Arizona Court of Appeals delivered a big win to Arizona Republican Kari Lake when it was revealed they would be expediting her election fraud lawsuit where she is attempting to overturn the 2022 election results in her home state.

"The court case, initially scheduled for March this year, will be heard by judges on February 1, giving Hobbs—who’s already been sworn in as Arizona’s newly elected governor—until January 17 to write why Lake’s petition to the court should be rejected," Newsweek reported.

"Our appeal is scheduled to be heard before the court on February 1st," the account tweeted. "Do not underestimate @KariLake‘s desire to get justice for the people of Arizona. It doesn’t matter how long it takes."

One nation, under God

Why? Who requires that our nation no longer act like it is young? Our national need for fresh perspective should not change, so our Constitution is ideal as it is and has been for centuries. It always leads us down the fresh path.

Get a copy of the US Constitution

In the context of the modern state, this philosophy engenders a set of normative policy prescriptions that reflect a belief in the efficiency and morality of unhampered markets, the system of private property, and individual rights -- and a deep distrust of taxation, forced egalitarianism (poverty the elitist class always try to force on society via tax and regulation), compulsory welfare, and ultimate power of the state -- the power of the "ruling class."

The politicians wrongly blame the innocent for the crimes of criminals that the Democrat/progressive prosecutors have been releasing into the community.

The politicians offer no other method of self-protection for the innocent and potential victims (The Democrat/progressives are dismantling police departments).

The National Rifle Association rates politicians on their positions about private possession of firearms at https://www.nrapvf.org/